TVS Young Media Racer Program 2019 Round 2: Has Anyone Seen My Footpeg?

The Round 2 of the TVS Young Media Racer Program took place at the Madras Motor Race Track in Chennai, which is possibly the best place to experience the race-spec TVS Apache RTR 200!

After having being done with the Round 1 of TVS Young Media Racer Program which took place at Kari Motor Speed Speedway in Coimbatore and managing a final race position of 7th thanks to a last-minute suspension setup change that backfired massively (after qualifying second and third in practice and qualifying respectively), it was time to head on over to round 2 – the Madras Motor Race Track, or MMRT in short.

A few months ago, all of the riders that were competing in this round had to undergo race track training from TVS Racing’s academy so all of us were already familiar with the track. It is a 3.17 kilometre-long circuit located at Irungattukottai, Chennai that was inaugurated in 1990 making it the first permanent race track in India. It has 12 turns and 3 straights with the longest one being 250 metres and has been awarded a Grade 2 licence by the FIA. And if I were to sum it up in short, it is arguably the best race track in India especially for the kind of motorcycles that we were riding as it offers a brilliant mix of sharp turns, long and flowing corners, straights, and everything in between.

So yes it is an exciting track to ride at but racing at it, well, that is a completely different ball game. You see, riding fast or trying to improve your track riding at a track is completely different than competing on it as you don’t have the luxury of time to understand small nuances of that track and you are expected to start attacking the moment the pit lane opens.

As regular race weekends go, ours also began with a quick practice session. This time around, while I did not want to touch the suspension settings at all because of what happened at the Kari Motor Speedway a few weekends ago, I did end up asking about it. Turns out, the good folks at TVS were giving us our motorcycles in the exact same configuration as the one we had during our last race. That would have been fantastic but not if you had put it in a setup that simply didn’t work.

As a result, even before hitting the track, after a good discussion with the maestros at TVS Racing, I did end up changing the preload again. This time praying harder than ever that it works out.

And before we knew, it was time. Pit lanes were open and it was time to begin our practice session. I was the first one to head out wanting to have enough time to be able to join back in the practice session in case I had to re-enter the pit to alter the suspension settings if it still didn’t work but thankfully, that was the not the case. The motorcycle turned in beautifully and was responding the way I wanted it to. It was so good that it took me a lap or so just to come back to terms as to how good of a motorcycle the race-spec TVS Apache RTR 200 is.

Once that was done, it was time to start pushing and re-adjust to the motorcycle. Jehan Darukhanawala, from ZigWheels, was the fastest rider amongst us the last time all of us were at this track and had the fastest laps last time around at Kari Motor Speedway as well – he and I both were having our own little duel during the practice session and also trying to figure out each other’s lines – journo-turned-racer mindsets I tell you. 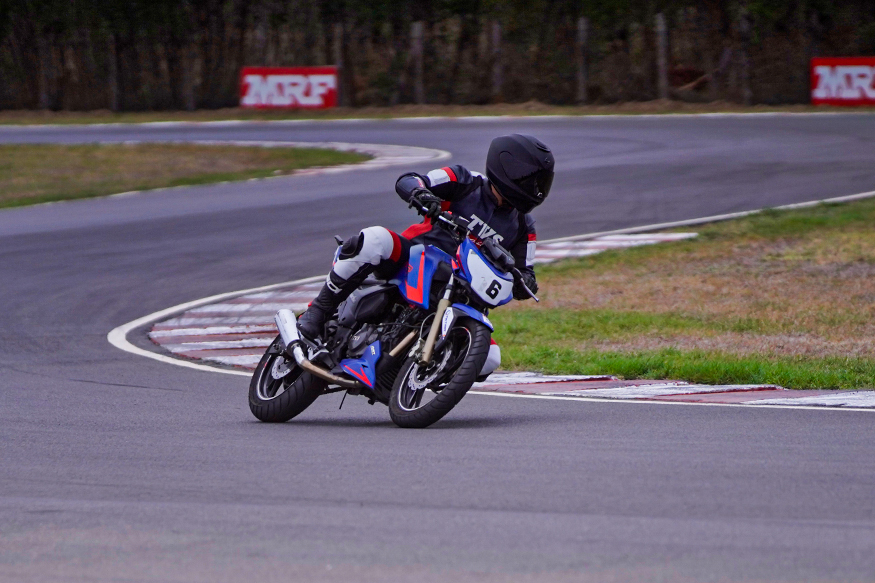 Once the practice session was over, we got to look at the timesheets. I knew I felt great on the motorcycle and that reflected on the results – I was the fastest rider in that session (2:19.629). The second place was taken by Varun Painter from PowerDrift whose fastest lap time was only six-hundredths of a second away (2:19.692)! This was going to be a three-way battle, or at least that’s what I thought.

Next up, was qualifying.

Tensions running high, all of the riders focused in, everyone had re-familiarized with the track and the motorcycle and everyone was set to give it their best. The session was only 15 minutes long so we had to get to right away.

During this time, Jehan and Varun started having their own little duel with Aadil Naik from Motoring World joined in as well. I decided to back out, create some space and focus on my own thing while having a front-row seat to all the action taking place in front of me. 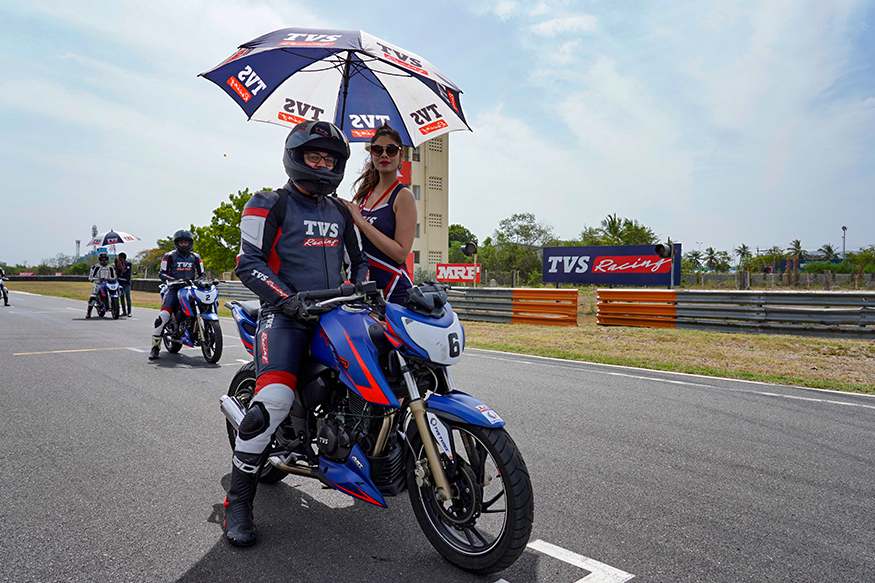 The biggest advantage that Aadil had was his weight, which makes a huge difference when you are on a 200cc motorcycle. Being amongst the lightest in the group and having qualified fourth, a good start (which he is very good at) would land him at the front and if Kari was anything to go by, having a good lead from the start is of utmost importance.

The 5-lap race was then ready to begin. The lights went off and away I went. Having a great start I pulled into the lead right away. I was able to push the motorcycle and myself without feeling uncomfortable or unsettled, so that’s what I did. Making a gap corner after corner, especially the long, flowing corners 4,5,6 and 7, but then disaster happened.

The corner 8 is a sharp right-hander that comes after a long straight so you are carrying a lot of speed while braking and if you get everything right, you can manage to get a good drive exiting the apex. I wanted to do so the same but I ended up losing the front which resulted in a huge crash with me flying into the grass toppling over five times before coming to a rest. Could not trail brake the last race, did it too much this time. Ah, well.

After all the never-ending toppling ended, I was reminded of the lessons we were taught during our race school in case of a crash. Lie down for 10-20 seconds, let the adrenaline come down a bit and first, check whether everything is alright and nothing has broken with you. I did the same and being utterly disappointed, I got up to see the marshal taking my motorcycle away. It didn’t look that bad as it had simply slid across the tarmac and on to the grass. Asked the marshal if the bike’s alright after which I was told the rear and front brake levers are bent and everything else seems fine. Oh, and the right footpeg is missing.

While the kind gentlemen started looking for it, I was feeling the loss of time so without any further delay, I remounted on the motorcycle hoping to see just how bad it is. The idea was to ride it back to the pits in case the motorcycle was not fit for riding and I had corners 9, 10 and 11 to figure that out. By the time I reached the pit entry, I had to make a choice – call it a day, go back to the pit and have a DNF or carry on without a footpeg and try to give it your best and complete the race.

Coming to lap 2 it was time to tackle the long right Corner 1 and not having a footpeg on the right to rest your foot on, made it extremely complicated. Taking the corners slow, not taking any over-the-top risk with an aim to simply finish the race, I tried to adapt. Having literally no space to keep the foot, I ended up resting the toe on the heel-plate during corners compromising lean angles by squaring off the corners and kept the foot on the exhaust-mount, which is where you would find the rear footpeg on a road-spec Apache RTR 200, during the straights. 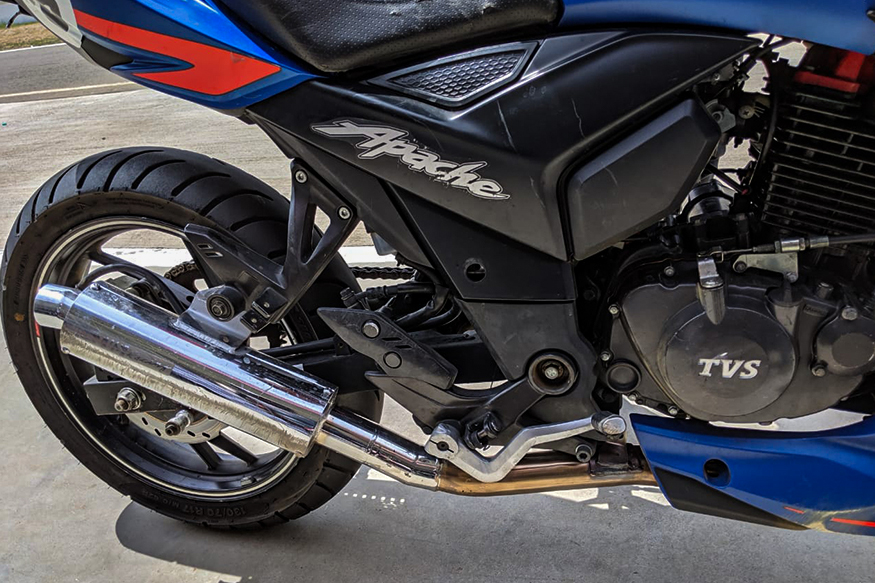 Looking back, am I as upset as I was after Kari? Not at all. If anything, I have never felt so good before. This was the first time ever that I have had a crash at a race track and I managed to get out of it without being seriously hurt. And it happened during a race, which I still finished.

The biggest take away though has to be when I look at the lap times. Back in April when all of had visited this very track to learn the art of riding on a race track, all of us had clocked way slower lap times. And now, everyone had gained huge pace and had built the confidence to attack corners and build up speed lap after lap.

For me, my fastest lap time during the training was 2:25.78 which wasn’t registered as it was clocked after the session was over but nevertheless, that was one of the fastest lap time of that day. This time, at the same track and on the same motorcycle, at the race, my fastest lap time was 2:26.651 – that is 0.8 seconds slower without a footpeg! And who knows, we could have been at the podium if all had gone well. But then again, that is racing for you. You got to look at the positive and I couldn’t be happier.

There’s possibly going to be a bit of time before the next round happens which is expected to be at the Buddh International Circuit. Let’s see how that one goes!

Thank you for subscribing.

The form collects name and email so that we can add you to our newsletter list for project updates. Checkout our privacy policy for the full story on how we protect and manage your submitted data!